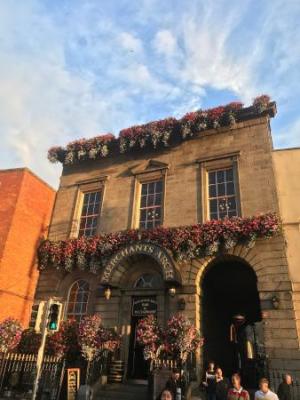 Unlike normal school days, our journey to the city of Guinness and goblins began with everyone arriving at the airport of Hamburg on time on the third of September. So the last trip of our school time was prepared.

That’s why it started directly after landing in Dublin, when we quickly went to our hostel which was located along the river Liffey. Therefore our view was beautiful and every important sight was accessible on foot. We immediately started exploring the city by walking next to the Liffey. Our class also received an overview about Dublin by Mrs. Hoedtke who read out important facts out of her guidebook. After that we went back to our hostel and fell asleep quite early because we were really exhausted by all the new impressions.

On the next day, the fourth of September, we accidentally became “undercover students“ at the Trinity College because the so called "Freshmen days" took place at that time and we were technically not supposed to be there which we figured out later on. But therefore our experience became inimitably authentic and we got into a lot of conversations with people who actually studied at Trinity - some of us even joined sororities. After having explored the campus we visited the famous old library where we were able to take selfies with well-known people like John Locke and Sokrates.

Our next stop was a place we were really excited to see, not only because we were promised free beer, but also because we were curious to find out how the most significant Irish drink was brewed. You might have guessed it: We went to the Guinness Storehouse. Our class was introduced to the brewing process of the black beer and we developed a tradition of drinking the dark beer which lasted throughout the whole class trip (of course we didn’t drink enough to get drunk).

As it started to get darker on that day we slowly got into the right mood for our next activity: The “Haunted History Walking Tour“ ???? . Our tour guide Marc told us about

Dublin’s most famous haunted places and even agreed to finish his tour inside a pub because the majority wasn’t dressed well enough for Dublin’s freezing nights, so the most scary thing for us was the goddamn coldness. 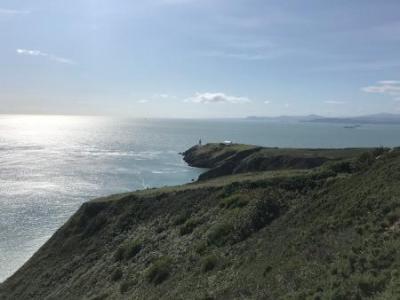 The fifth of September we spent exploring the nature of Howth by doing a coastal walk along the cliffs. The outlook that was presented to us quickly became the highlight of our trip, since we got to see the entire beauty of Irish nature. We finished the walk with having some fish and chips and lobster while enjoying the view over the East Pier in Howth town. Aside from that we spent some time

enjoying the sun which has shone the entire day for the first time since we arrived in Ireland.

Even if we were very tired the next morning we had a lot of fun walking through the Writers Museum and getting to know the life stories of famous Irish writers like Oscar Wilde and Samuel Beckett. After that we strolled through the Garden of Remembrance, which attracted us with some beautiful flowers and a huge fountain in the middle of it. Afterwards we took a walk through the city together and everyone got to choose a museum they wanted to visit by themselves later on. Therefore our class got to see the national gallery, the national history museum and many more.

Subsequently we had some free time before we got back together in the evening to experience a really entertaining Literary Pub Crawl, where two actors presented the story of Irish literature in a very vivid way.

The highlight of the next day was the visit of the botanical garden, which we had a look at after we had walked over the Prospect Cemetery, the biggest cemetery in Ireland. At the botanical garden we saw exotic plants and flowers and since we enjoyed looking at them, we spend quite some time there.

Since it was Saturday we visited the oldest pub in Dublin, the Brazen Head Pub. And as drinking beer is part of the Irish culture we had one or another Guinness and ended up in a karaoke bar.

Even though our night ended up late, our last day started early in the morning. We visited the Christ Church Cathedral and while others waited outside some of us attended the service. The cathedral itself was very impressive and the service was a good insight into the faith established in Irish culture. We did not only admire the cathedral on that day but also got to see some other architecture, for example the Powerscourt Townhouse Centre and of course we spend some time shopping at Grafton Street. Being bored of shopping after a while we wanted to see some nature again and so we went for a walk through St. Stephens Green, one of Dublin’s largest parks.

To sum up, the last trip of our school time was a good mix of free time and culture and gave us the opportunity to bond within our class while getting to love the city of Dublin. So the trip can be summarized with the words of James Joyces: When we die, Dublin will be written in our hearts.

A report written by Aida Berberi and Satu Stührmann